Publication of the Marathon Marathon book 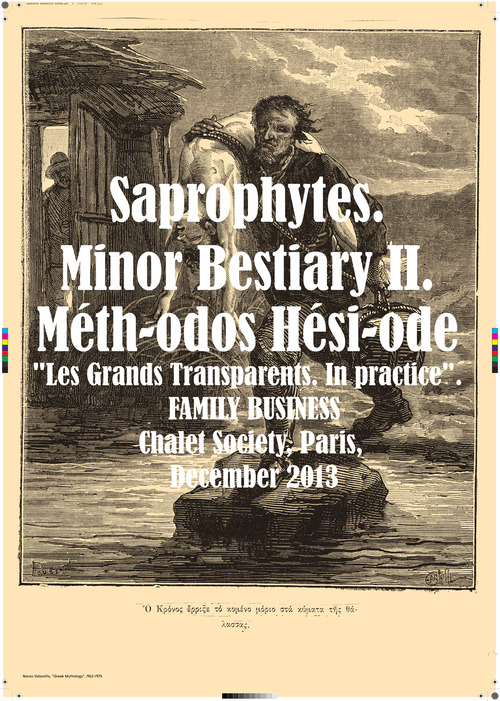 The Saprophytes created a multimedia installation in the crypt situated at the alley of the Chalet Society, including the book- in- film- format work Minor Bestiary. Thesaurus Alienus Novissimus and a public reading of Theogony.
With the aim to go back to the roots, the genesis of the monstrous and the bestial, as it is paradoxically described in the genealogy of the most humanistic of all world philosophies, and explore its relation to the contemporary and the political, this open reading de-monstrates the collective potential. 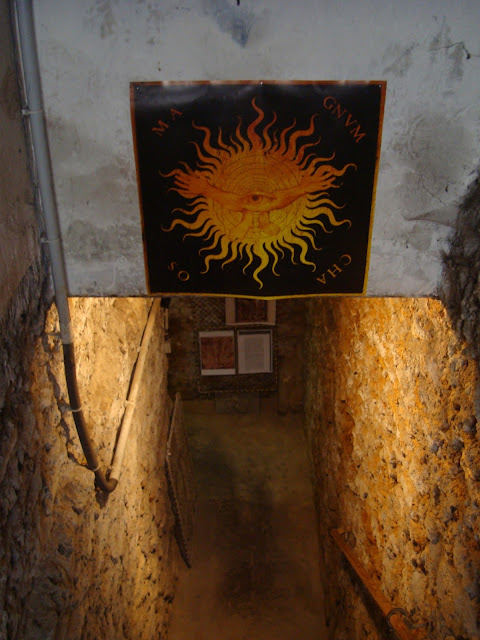 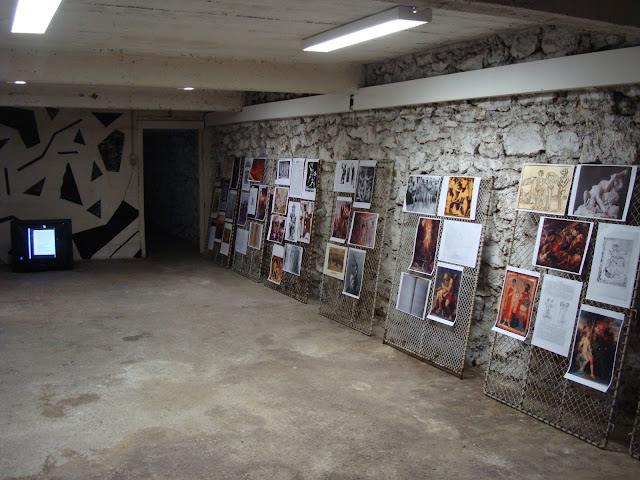 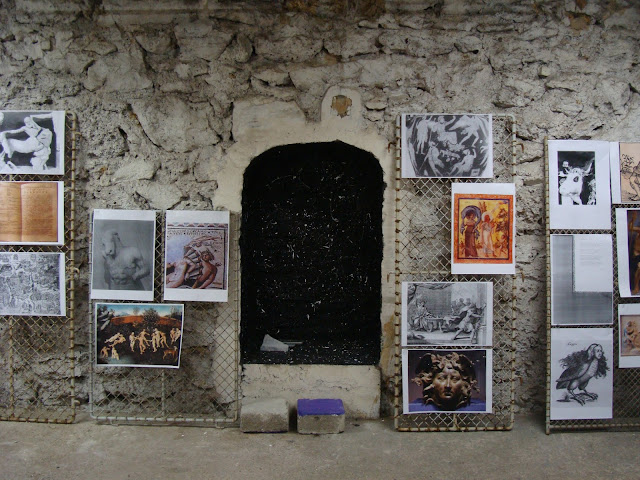 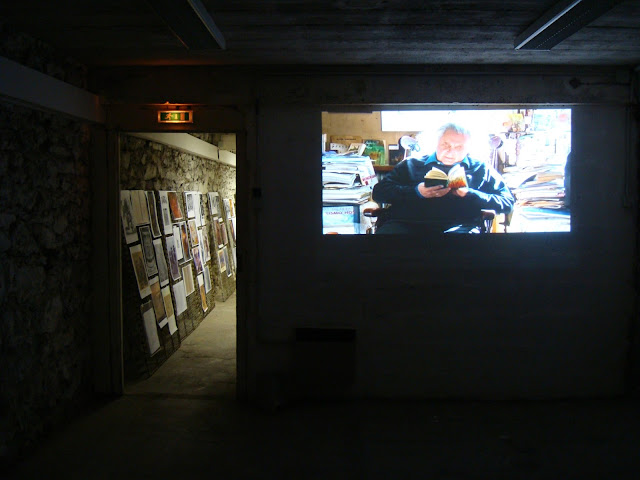 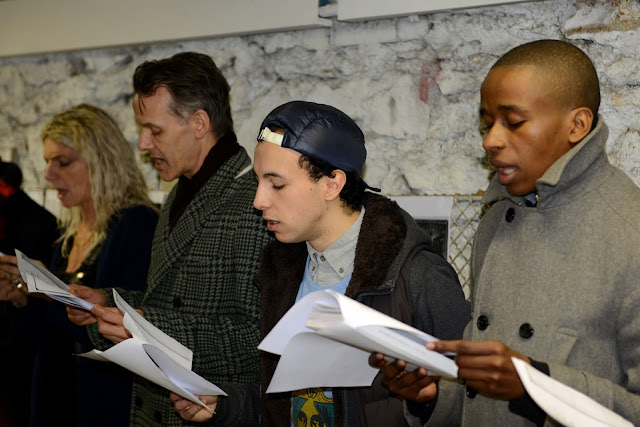 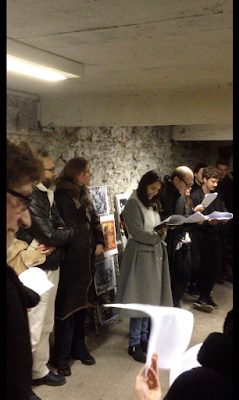 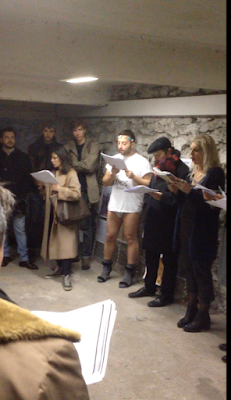 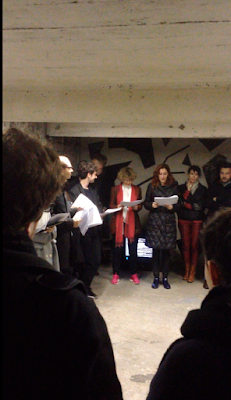 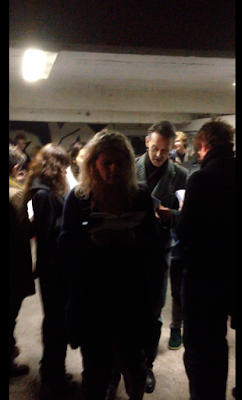 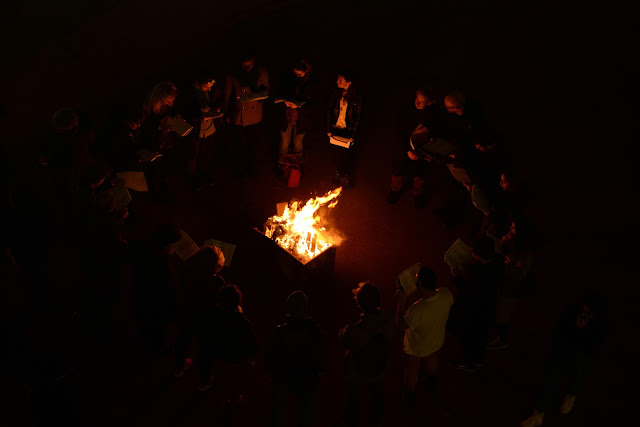 Posted by Saprofyta at 3:47 AM No comments:

Saprophytes’ latest book in video-format is an in progress project which focuses on finding, processing and assembling pre-existing material on the monstrous and the alien, insisting on local sources, the fringes of normality [social, religious, historic, etc.] and the gray areas of conceptual decay of disparagement.
In this project are examined issues of identity, kinds of otherness, anthropological and cultural processioning of symbols and riddles towards the Other, time, fear, loss, death, and furthermost the relations of Civilization to Nature. All these pictures represent zoomorphic aliens and emblematic figures of otherness under the combination of heterogeneous sources and fragments from High and Popular (Low) culture.

‘’Minor Bestiary. Thesaurus Alienus Novissimus’’ was presented in the exhibition ‘’Hell As Pavilion’’ curated by Nadja Argyropoulou at the Palais de Tokyo, Paris.(27/02/2013 - 04/04/2013)
The members of the Saprophytes are Nadja Argyropoulou, Malvina Panagiotidi, Yorgos Tzirtzilakis and Marina Vranopoulou.

Posted by Saprofyta at 3:11 AM No comments:

LUSTLANDS (A FAMILY NOIR UNDER THE SUN: THE N.Y. REMATERIALIZATION)

Could a salon for the 21st c. be organized at a farm house in Peloponnese - Greece?
Can it be DEmaterialized and REmaterialized, beamed from Thermissia-Greece to Chelsea-N.Y.?
Is it possible for Family Business to work as a transporter???? (and do we risk a transporter accident in the process?)

Artists Lakis and Aris Ionas -The Callas, Family member / curator Nadja Argyropoulou and a group of artists and art works are the fearless voyagers of the dematerialization / rematerialization project LUSTLANDS (a family noir under the sun: the N.Y. rematerialization), hosted at Family Business from January 24, 2013 to February 16, 2013.

The project appears in N.Y. after originating, as LUSTLANDS (a family noir under the sun and other experiences), for one day (23 June 2012), in a family farm, situated at the area of Thermissia in Argolida and the South of Greece. Months after being just an energy pattern—due to the serious European crisis that affected all related circuits―Lustlands is reconverted into matter that matters; thanks to Family Business and the valuable energy source ever known as Lust and found in abundance at the much condemned South.
Lust, enchantment (sagéne) as has been investigated by the cooperating project members, has been first transferred to the Greek province, exactly where it is rumored that, because of the crisis and the ever impending ‘Drachmaggedon’, everything and everyone will return.
Nostalgia for the oddities and clichés of the small home towns, desire, ecstasis, black humor, the aimless midsummer days of childhood, ‘friendship’ as a ‘family noir’ of adult life, the shimmering sun and it’s strange light, a ‘museum of the intimate’ installed in the wet yards and among the flower pots and olive trees of vacation houses, the concept of stasis, the ethics of failure, malfunctioning and the paradox of objective chance: all of the above (and hopefully more) has shaped LUSTLANDS. The wild and remote lands, suggested by the project’s title, may be those of Lust or even those of Last but are definitely part of the commons and as such are accessible to all.

The VELVET team, which The Callas have founded and operates like an extended family for the last five years (Velvet Magazine, Velvet Bus, Velvet Festivals, Lust magazine) in Greece and abroad, constitutes the project’s backbone. Artists, writers, curators, musicians, designers, film makers, friends and relatives have become part of the experience continuum and contributed in many ways.
Many of them are also beamed to N.Y., and due to loss of matter stream and britch of safety protocols, they reappear in many altered states and forms (clothes, rags, texts, paintings turned photocopies, photos shrunk, events condensed into notes, delicious foods recreated as films, cicada fuzz reassembled as digital sound, nets and lights, animate and inanimate things and pleasure patterns); as an unpredictable, low-fi, paradoxical salon. Local N.Y. bands will celebrate the oddities, The Callas will be beamed over and perform at the last day, February 16, on the special occasion of the Family Business first birthday!!
Imagination will be summoned to fill in the gaps. And hopefully this will not be the end of it...
LUSTLANDS (a family noir under the sun: the N.Y. Rematerialization) will be the calling card, a summons so to speak, for a 2013 Summer visit to Greece (June 4) where xaos (chaos) will be revisited at the same farm in Peloponnese, right across the sea from the island of Hydra, and right over the N.Y. Atlantic coast. 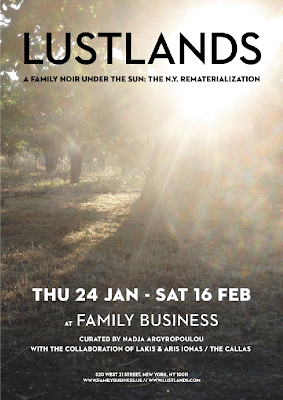 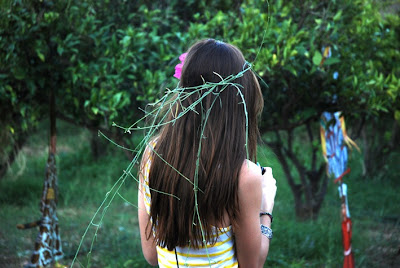 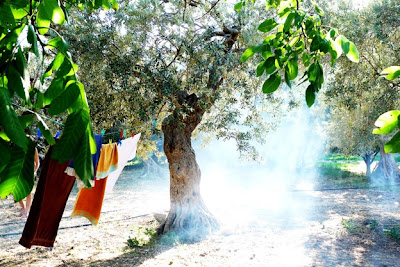 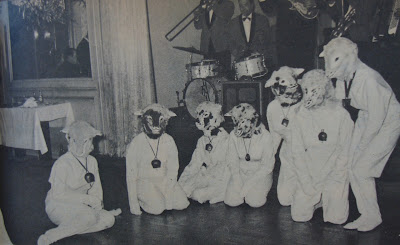 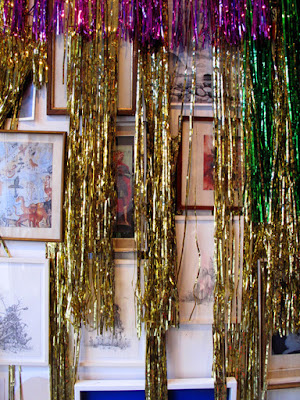 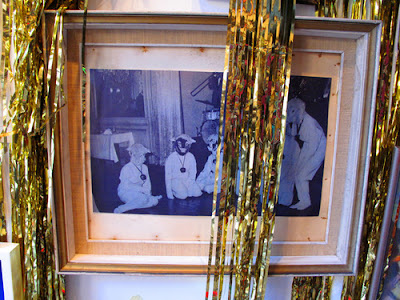 Posted by Saprofyta at 12:15 PM No comments:

LUSTLANDS (A FAMILY NOIR UNDER THE SUN AND OTHER EXPERIENCES) 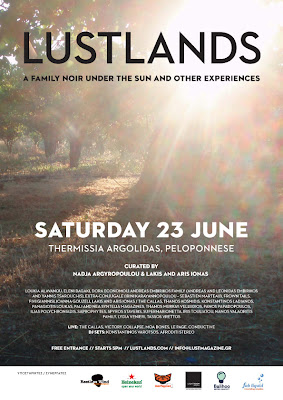 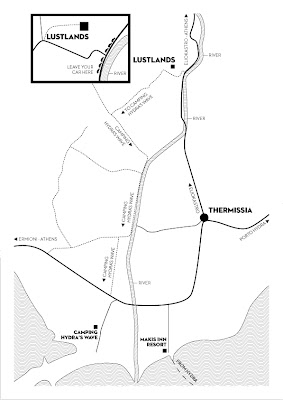 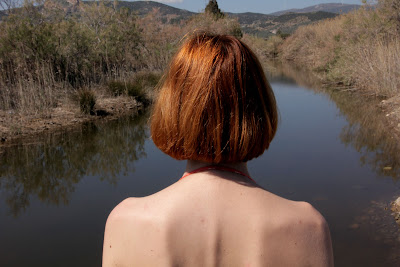 Presentation of the artistic research work of Saprophytes at the OU.UN.PO Symposium "Oral Tradition" in Athens

"Worlds have a longer life than deeds". Pyndaros

Ouunpo is a three days symposium that will take place in various locations across and around the city of Athens through conventional and non-conventional investigations. The symposium, dedicated to the “oral tradition”, will include performance, round-table discussions, lectures, screenings, visits and walks to various selected sites.
Greece is a country where myths, art, epic and lyrical songs originated from oral tradition and kept alive by travelling poets. This country is also in the limelight due to the current political and economical crisis.
Our visit will be an occasion to investigate the tradition of storytelling and myth as a form of sharing knowledge and performing history, which often stand in opposition to the methodology of institutions. We will try to re-evoke the oral memory of events in contemporary (art) world, with a specific approach to the rituality and the improvisation that are always connected to oral narratives. Performance and initiation to a secret knowledge will be also the objects of our conversations with members of the esoteric milieu and of the masonic lodge.
Inspired by the great religious, theatrical, democratic and artistic traditions of Greece, and in dialogue with local artists, musicians, composers, art historians, writers and curators, we will observe the present moment, and reflect about how a genuine revolutionary movement needs to brake with literal repetition of the past. To perform something means to interpret it, to betray it, to distort it. Boris Groys affirms that “the opposition between living spirit and dead letter informs the whole traditional Western discourse on religion”, but also on art itself, as embodiment of the creative spirit of change.

THURSDAY, 29TH SEPTEMBER
*11 am: Trip by ferry from Pyraeus to the island of Aegina and visit to the temple of “Aphaea”. We will spend the all day in the island, donʼt forget to bring you bathing suit!

*2 pm – 3.30 pm: lunch
*4 pm – 4.30 pm: van to Eleusys with departure from Deste Foundation.
*4.30 – 8.30 pm: visit to the archaeological site of Eleusys. Performance by Fatos Ustek and Per Huttner. Visit of the temporary exhibitions of Loukia Alavanou and Stephen Antonakos. Collective performance directed by artist Klas Eriksson. Screening of the work of artists Panagiotis Loukas and Panos Tsagaris. Performance by Elena Nemkova.
*8.30 -10 pm: Artist Marios Chatziprokopiou presents the screening of the film by "Agelatos Petra" by Filippou Koutsaftis in an outdoor cinema.

SATURDAY, 1RST OF OCTOBER
*10.30: Athens. Visit to the Masonic Order Delphi and to its temple. Presentation by Iordanis Poulkouras and Sasha Chaitov about "The Eleusinian mysteries through the ages. Initiatory practices in the Western esoteric tradition".
*17.50: Athens, Six Dogs space in collaboration with curator Kostantinos Dagritzikos: Composer Georgia Spiropoulos (www.georgiaspiropoulos.com) will present her work. She will also introduce us to Yianna Tsokou, and we will discuss with them about Anastenaria, ancient rituals of fire still performed in Greece and Bulgaria, and will show us videos of the theatrical revival of Delphi promoted by poet Angelos Sikelianos in the beginning of the XXth century.
*8 - 9 pm: Six Dogs. Selection of Greek experimental music by Samon Takahashi. 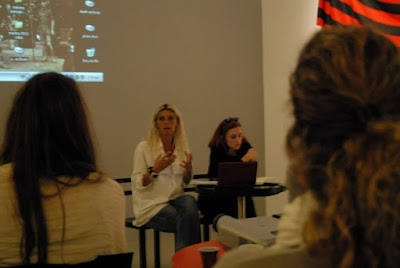 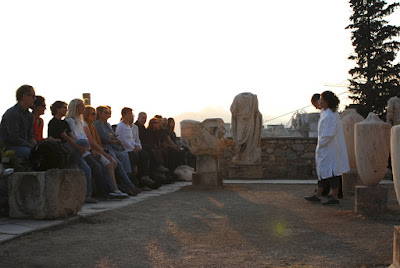 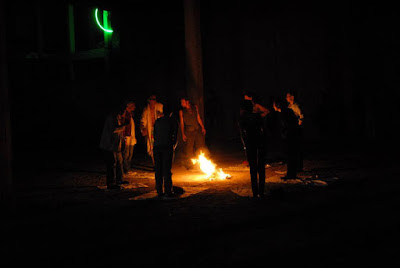 Posted by Saprofyta at 12:59 PM No comments: